One of the well-known figures in the scientific world who had an experience with homeopathic treatment was Charles Darwin. What makes it interesting is that he did not believe in his treatment and was convinced that it was useless, which serves as an example of how the treatment works in people who have no faith in it, i.e. removing the possibility of the placebo effect.

Charles Darwin's illness is mentioned in virtually all versions of his biographies, but the role of homeopathy in his treatment is either dismissed or not mentioned at all, and his own experiments with it are usually omitted.

1831 - Darwin graduated from Cambridge and began a 5 year journey on the HMS Beagle surveying the coast of South America.

1833 - Darwin caught a fever in Argentina

1837 - From approximately this year, Darwin was frequently incapacitated with episodes of stomach pains, vomiting, severe boils, heart palpitations, trembling and other symptoms. Today, there have been speculations of Darwin suffering from Chagas disease or Meniere's disease, but at the time no one could understand what was happening and all treatments were useless, at best.

1847 - Darwin's illness worsened. He experienced frequent episodes of vomiting and weakness, along with fainting spells and seeing spots in front of his eyes.

1849 - Darwin was so ill, that he thought he was dying. Darwin wrote to his good friend, J.D. Hooker, an English botanist, that he was "unable to do anything one day out of three and was altogether too dispirited to write to you or to do anything but what I was compelled. I thought I was rapidly going the way of all flesh."

1849 - As Darwin was so ill, was unable to work one out of every three days, and had suffered various troubling symptoms for over 10 years, he decided to seek treatment from Dr. James Manby Gully, a medical doctor who used water cure and homeopathic medicines. 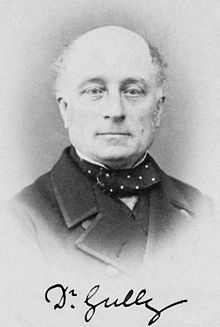 Dr. Gully was recommended to Darwin by Captain of the HMS Beagle, Sir Bartholomew James Sullivan, and one of Darwin's cousins, William Darwin Fox. Dr. Gully was a medical graduate of University of Edinburgh and opposed the use of drugs of that era, particularly polypharmacy - the use of multiple drugs concurrent for a patient; a practice that continues to this day.

Gully's medical practice did not simply provide water cure. He also gave dietary advice and prescribed homeopathic medicines and had clairvoyance practised in his clinic. He was the author of the book, 'Water Cure in Chronic Diseases,' which Darwin read.

Darwin was extremely skeptical of all methods used by Gully, but just two days after beginning his treatment on March 30th, 1849, Darwin acknowledged, "I have already received so much benefit that I really hope my health will be much renovated."

After 8 days, a skin eruption broke out all over Darwin's legs, and he was actually pleased to experience this because he had previously observed that his physical and mental health improved noticeably after having skin eruptions.

The improvement continued and Darwin went a month without vomiting and started to gain weight. One day, he surprised himself by being able to walk 7 miles. He wrote a friend, "I am turning into a mere walking & eating machine." 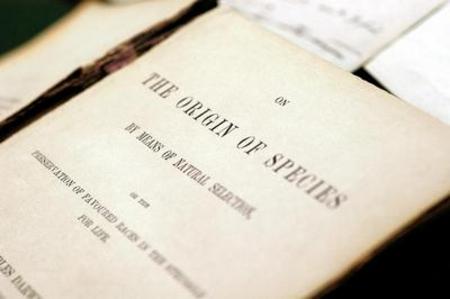 After 16 weeks, he felt like a new man, and by June he was able to go home to continue his work on 'Origin of Species.' Darwin actually wrote that he was "of almost perfect health."

Some of his digestive and skin symptoms returned at various times in his life, so he returned to Dr. Gully's clinic for more treatments, staying two to eight weeks at a time. He grew to appreciate water cure, but remained skeptical of homeopathy.

In 1850, eighteen months after first going to Dr. Gully's clinic, Darwin showed his skepticism of homeopathy in a letter:

"You speak about Homeopathy, which is a subject which makes me more wrathful, even than does clairvoyance. Clairvoyance so transcends belief, that one's ordinary faculties are put out of the question, but in homeopathy common sense and common observation come into play, and both these must go to the dogs, if the infinitesimal doses have any effect whatever. How true is a remark I saw the other day by Quetelet (a famous statistician of that time), in respect to evidence of curative processes, viz., that no one knows in disease what is the simple result of nothing being done, as a standard with which to compare homeopathy, and all other such things. It is a sad flaw, I cannot but think, in my beloved Dr. Gully, that he believes in everything."

Even though Darwin observed the results of Dr. Gully's blend of homeopathic, dietary and water cure treatment on his own health, and saw improvements made by the other patients in Gully's clinic, he remained unconvinced.

1860-1874 - Darwin conducted several experiments evaluating the effects of small doses on an insect-eating plant, Drosera rotundifolia. He found that solutions of certain salts of ammonia stimulated the glands of the plant's tentacles and caused the plant to turn inward. He made his solution every more dilute, but the plant still was able to detect the presence of the salt and respond. 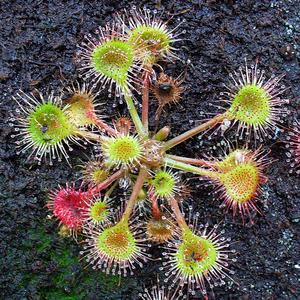 On July 7th, 1874, he wrote to a well known physiologist, Professor F. C. Donders of Utrecht, Netherlands, that he observed at 1/4,000,000 of a grain had a demonstrable effect upon the Drosera rotundifolia. Darwin wrote, "the 1/20,000,000th of the grain does the same. Now, I am quite unhappy at the thought of having to publish such a statement."

1875 - This effect is also described in Darwin's book, 'Insectivorous Plants:'

The reader will best realize this degree of dilution by remembering that 5,000 ounces would more than fill a 31 gallon cask (barrel); and that to this large body of water one grain of the salt was added; only half a drachm, or thirty minims, of the solution being poured over a leaf. Yet, this amount sufficed to cause the inflection of almost every tentacle, and often the blade of the leaf....My results were for a long time incredible, even to myself, and I anxiously sought for every source of error...The observations were repeated during several years. Two of my sons, who were as incredulous as myself, compared several lots of leaves simultaneously immersed in the weaker solutions and in water, and declared that there could be no doubt about the difference in their appearance.

<...> Moreover, this extreme sensitiveness, exceeding that of the most delicate part of the human body, as well as the power of transmitting various impulses from one part of the leaf to another, have been acquired without the intervention of any nervous system."

Despite Darwin's greatly improved health, and his experiments with Drosera, he never publicly attributed any benefits directly to homeopathy, neither has he published any works studying homeopathic effects on living organisms. This could be explained by that, even though homeopathy achieved impressive popularity among British royalty and many of the rich and powerful of the time, orthodox physicians and scientist were greatly opposing it and did not tolerate any mention of its benefits. Since Darwin was just beginning to propose his own new ideas about evolution, and his ideas were not immediately accepted by the scientific community, his positive experience with homeopathy would likely have damaged his credibility and could have ended his professional career.

Darwin was a dedicated, meticulous, prolific, passionate and profoundly linear scientist, whose conclusions are considered some of the most influential in the history of man. Even so, when Darwin, later in life, stated that it may not be so 'simple' as survival of the fittest, and that there were clearly signs that much of nature was cooperative, his peers dismissed his statements as the ravings of a senile old man; the fate of many a scientist, including Isaac Newton and Louis Pasteur, who experienced fame for early theories, and later revised them as their understanding evolved...only to be met with disapproval.

It isn't easy to take a stand against the establishment, even if you have contributed to the established view, so if indeed Darwin secretly gave credence to homeopathy, and yet chose not to share his views, one can understand the pressures that would lead to such a choice. One must choose one's battles and Darwin's contributions to science, and his remarkable capacity for pursuing self education, are truly inspirational.

Bonny Casel ND, MAMH, MBSLM, FBRI is the founder and director of School of Natural Medicine UK, course creator of Lifestyle Medicine for Self Care, and founding director of Council for Self-Care. She is also a training provider for NHS hospital staff, guest lecturer, and speaks internationally with a focus on holistic pro-health care.

Bonny began her teaching career in 1988 and has studied with many of the leading pioneers of natural medicine of the last century, including Dr. Bernard Jensen, Dr. John Christopher, Dr. Farida Sharan, Dorothy Hall, and Denny Johnson, as well as scientists Bruce Lipton and Nassim Haramein. She has authored several accredited courses, including the comprehensive Healing Diets Nutritional Consultant and Quantum Botanicals Advanced.

Dedicated to educating, empowering and inspiring people to achieve independent health and quality of life, Bonny is also committed to lifelong continuing education, experiential self- care and to contribute what she can to make the world a better place. Please visit www.herenowhealing.com and www.lifestyle-medicine.com to find out more.